In 1996 the Dunedin Environment Centre Trust (DECT) began replanting in the Kaikorai
Commons.
At that time, the reserve was just a wet paddock and the stream was just an open drain,
running totally straight down the valley.
Together with the Dunedin City Council Parks and Reserves Department we managed to
recreate a wetland in the middle of the Commons back in 2007 and plant thousands of natives
throughout the ~ 600m length of reserve.

On the opening day for the wetland, when we started the planting in June 2007, it was
sleeting and yet we had over 100 local residents turn out, in addition to the Mayor, Peter
Chin, local MP’s Pete Hodgson and David Benson-Pope and Metiria Turei.
We have continued planting since, infilling with understored plants, and expanding the
concept of the park to include food production by planting fruit trees.
Now, some of the podocarps(eg. Kahikateas) are reaching 7m tall and tuis zip and dance in
the kowhai trees. 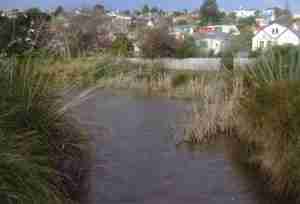 In 2011 we ran an educational amenity creation course with local schoolchildren and that’s
where the ceramic-tile covered seat next to the pond came from. It is decorated with images
of animals and plants which were once local to this area.
Also made in this class was a Oamaru-stone and macrocarpa pou, emplaced on the track near
the pond also.
Signage was designed by the kids and two groups, one from Balmacewen Intermediate and
the other from Kaikorai Primary, combined together to perform a dance telling the story of
the Kaikorai through time.

Since 2014 the threat of destruction of much of the vegetation has hung over the Commons.
The DCC intends to repair some damaged sewage pipes in the reserve, which could mean
destruction of a 3m or 5m or 12m wide strip; we don’t know yet.
We hope not!